Jump Start: IoT may Already be Present in Unexpected Industries It is hard to get much farther away from Silicon Valley than the South Island of New Zealand. Not just geographically, but also industrially: where Silicon Valley is typically associated with sleek technology and new apps, New Zealand chiefly exports agriculturally-based products. So it may be a bit surprising to learn that many of New Zealand’s farmers have been already using the Internet of Things (IoT) for nearly a decade. For example, for the past few years the government has required that all cattle and deer be individually tagged with RFID tags. Farmers must scan these tags anytime an animal leaves the farm, but can also do so when weighing or giving treatment to animals. This data can then be automatically stored, analyzed, and retrieved in farm data warehouses. These tools, such as FarmIQ, allow farmers to see a variety of data together giving a rich source of information about their herds, from field history to live weight gain tracking. The same tracking also extends to meat processing plants, which provide feedback to farmers about the quality grades for specific animals. In this way, farmers can start to pinpoint which genetics, pastures, or husbandry techniques may give them the best farm gate prices.

All of this was already happening without the letters “IoT” ever entering the vocabulary. But it’s important to realize that this is IoT. It links sensors and analytics to inform and drive actions—and that connectivity makes it possible to realize efficiency benefits based on previously impossible-to-find data.

"Once an industry realizes that IoT is in use, it can use the architectural nature of IoT to better understand new opportunities"

A Rose by Any Other Name

The Internet of Things. The words themselves even seem to be something out of some science fiction vision of the future. In fact, the popular perception that IoT must be built upon cutting edge machines or make use of the newest artificial intelligence software serves to reinforce the view of IoT as a fancy, unreachably high-tech solution reserved for Silicon Valley and big research firms. 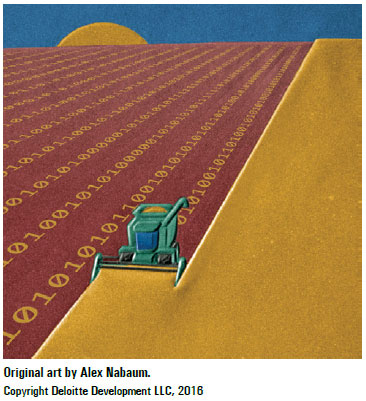 But to view IoT through that limited lens may only illuminate part of the story. The simple fact is that individuals working in many industries beyond Silicon Valley may already be using IoT today—and may not even realize it. So how is this possible? After all, if someone uses any technology from a smart phone to a hammer, the mere act of using it implies awareness.

The answer is that IoT is not a technology; it is technology architecture—a structure that brings together a variety of technologies, linking them in a specific way to accomplish something entirely new. As an analogy, specific technologies are like individual toy bricks, while the architecture is the directions that tell you specifically how to assemble those bricks into a full, new toy. For IoT, that specific way of combining those enabling technologies is given by the Information Value Loop (see Figure 1). When sensors, communication protocols, data standards, augmented intelligence and analytics come together in that specific way, information is able to flow, giving users new insights and allowing them to take new actions. And that is the key. If those technologies are connected in that way it is IoT. It is still IoT even if it is called Internet of Everything or Machine to Machine or any of the host of other names.

This conclusion is more than just semantics. Considering IoT in this way can provide a jump start on harnessing the biggest benefits of IoT: increased efficiency; greater product differentiation; and even new sources of revenue. For the architecture of IoT determines how it creates new value, and therefore, how companies can capture some of that value for themselves.

Opportunities for Farmers, Lessons for Business 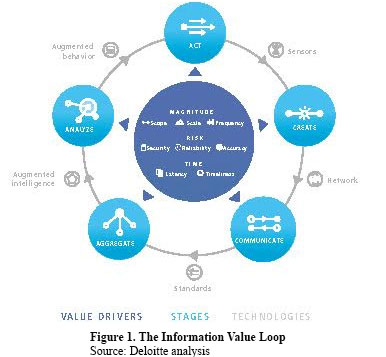 Although farmers in New Zealand have been able to implement IoT and realize some of its benefits even without using those terms, recognizing that IoT as an architecture may be key in taking the next step. Those farmers have an opportunity to expand the scope of existing IoT applications and use information to capture a greater percentage of consumer value, always a critical challenge in commodity based industries. That is to say, by extending the same unit-level tracking that is already in place from farm to processor to include distributors and retailers as well, farmers can offer consumers verification of the quality, safety, and social responsibility of their products. Consumers around the world worried about impurities in food or sustainable farming practices may be willing to pay extra for such verification. Not only that, but by having much of the needed infrastructure already in place via its use of RFID, New Zealand agriculture can likely move more quickly, easily, and with fewer costs.

And this is not an opportunity that is restricted to one small group of farmers half a world away. We have seen exactly the same story play out in presentations to many industries from government to logistics: IoT may already be in play but under a different name. This can be a thunderclap realization. Once an industry realizes that IoT is in use, it can use the architectural nature of IoT to better understand new opportunities and push the bounds of what is possible even farther—greater product differentiation, new business models, even new sources of revenue. With low IoT adoption rates continuing among consumers, the best visualization of the future of IoT may not be a sleek smart home device, but rather a sheep on hillside in New Zealand.